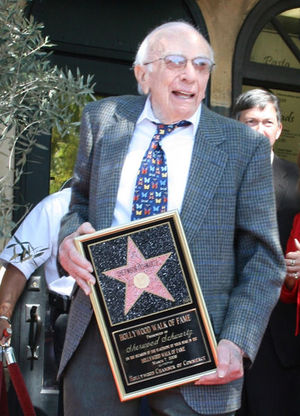 Schwartz receiving his star on the Hollywood Walk of Fame in 2008.
Advertisement:

Sherwood Charles Schwartz (1916 – 2011) was an American comedy writer and producer.

He began his entertainment career writing jokes for the Bob Hope radio show as a way to earn money while studying for his master's degree in biology. He eventually joined the show's writing staff, and also wrote for The Adventures Of Ozzie And Harriet and the Armed Forces Radio Network before making the jump to television.

He created two of American TV's best-remembered half-hour sitcoms, Gilligan's Island and The Brady Bunch, and the not-so-well-remembered It's About Time. All of Schwartz' shows opened with an Expository Theme Tune. Each had a relatively large ensemble of Flat Characters who passed the Idiot Ball around from week to week.

Though neither was a big hit in its original network run, Gilligan's Island and The Brady Bunch have lived on in reruns (and, in the case of The Brady Bunch, multiple spin-offs, revivals, and reimaginings) to become permanent fixtures in pop culture.