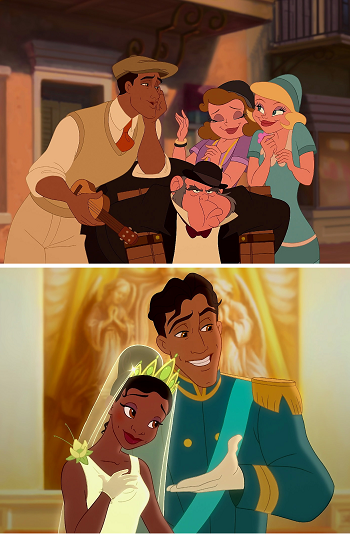 "To what a bad choice is many a worthy woman betrayed, by that false and inconsiderate notion, that a reformed rake makes the best husband!"
— Samuel Richardson
Advertisement:

Reformed Rakes are what happens when the heroine of a romance story wants to eat her cake and matrimonially have it too, ending up with a former womanizer with a penchant for criminal activity who doesn't just accept monogamy but thrives in it. Rakes, men famous for cutting a swathe through the wives and mistresses of the town, not only know how to please a lady and protect her from harm, but they are only waiting for that one special woman who will cause them to reform and turn into the perfect husband and family man. The converse is that any man who didn't sleep around as a bachelor will be a boring wimp as a husband at best, if not an outright villain.

Common in period romances, especially those set in Regency England.

Sub-trope to I Can Change My Beloved and Not Like Other Girls, it's actually often the result of the combination of these two tropes. A very common Relationship Sue plotline.

Compare to All Girls Want Bad Boys, but here the trope is not just that the bad boy is attractive, but that the heroine's love fixes his worst traits, so you can have both that trope and Single Woman Seeks Good Man simultaneously. Also compare Ladykiller in Love, a more realistic take on this issue, and Female Angel, Male Demon for a metaphor of this trope when the two aforementioned characters are in love.