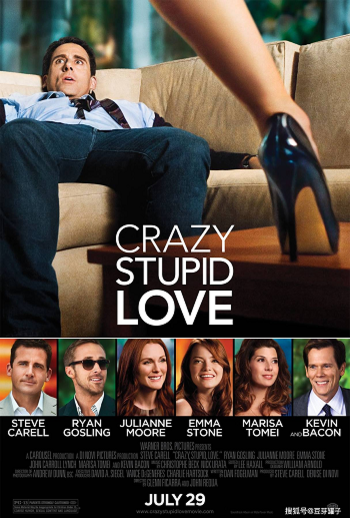 "When we're done... this wife of yours... she's gonna rue the day she ever decided to give up on you."
— Jacob
Advertisement:

Crazy, Stupid, Love is an American Romantic Comedy. It was released in 2011.

Cal Weaver (Steve Carell) is living the dream - he's got a good job, nice house, and great kids. Cal gets the surprise of his life when he learns his wife Emily (Julianne Moore) has been cheating on him with a coworker, David Lindhagen (Kevin Bacon), and wants a divorce. After moving into his own apartment, Cal begins grieving at a bar night after night talking to himself about his situation where he meets a young man named Jacob Palmer (Ryan Gosling). Jacob is a womanizer who successfully beds women each night, although he does take a particular interest in a young woman named Hannah (Emma Stone), the only woman to resist his advances.

Not wanting to watch Cal keep draining his sorrows night after night, Jacob agrees to teach him his trade so that he can have the confidence to earn Emily back. Because Emily is the only woman Cal has even been with, Cal doesn't have much experience, so Jacob gives Cal a makeover and resolves to teach him how to have game. Meanwhile, Cal and Emily's son Robbie (Jonah Bobo) has a crush on his neighbor and babysitter, Jessica (Lio Tipton), and makes numerous gestures to try and win her heart...while remaining oblivious to the fact that she is in love with Cal.

Jacob and Cal Go to the Mall

Intent on giving Cal confidence, the suave and well-dressed Jacob takes him on a shopping trip.

Jacob and Cal Go to the Mall

Intent on giving Cal confidence, the suave and well-dressed Jacob takes him on a shopping trip.