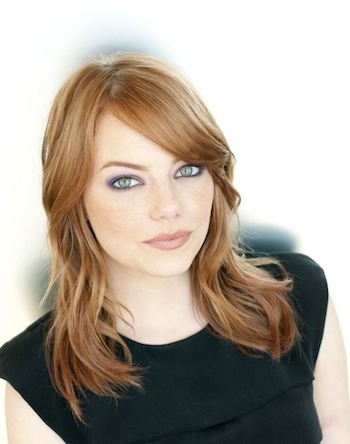 "I know that when you’re a teenager, and even sometimes when you’re an adult, what sets you apart can sometimes feel like a burden and it’s not. And a lot of the time, it’s what makes you great."
Advertisement:

She got into community theater at a very young age and was already in youth improv troupes as a pre-teen. She first came to Hollywood in 2004 at the age of 15 after she used a slideshow presentation to convince her parents to let her become an actress instead of finishing high school. She competed on a VH1 reality show "In Search For The Next Partridge Family" and won the part of the new Laurie Partridge. However this updated version of The Partridge Family never made it past the pilot. She next tried for the part of Claire in Heroes but lost out to Hayden Panettiere. She appeared in an episode of Lucky Louie as a teenage babysitter who wanted to give Louie a blowjob and the short-lived FOX series starring Nathan Fillion called Drive (2007).

In 2007 she made her feature film debut in the Judd Apatow-produced comedy Superbad as Jules, the girl Jonah Hill's character wanted to go out with. The next year she was in The House Bunny starring Anna Faris and The Rocker starring Rainn Wilson. She then starred in the horror-comedy Zombieland in 2009 along with Woody Harrelson, Jesse Eisenberg and Abigail Breslin. In 2010, Emma got her first lead role as Olive Pendergast in the teen comedy Easy A, which became her Star-Making Role and earned her a Golden Globe Award nomination for "Best Actress in a Comedy/Musical". In 2011, she was in the films Crazy, Stupid, Love and The Help, which both had critical and commercial success. Stone also played Gwen Stacy in The Amazing Spider-Man Series alongside Andrew Garfield as Spider-Man in 2012 and 2014.

In 2015 she earned her first Oscar nomination for "Best Supporting Actress" for Birdman or (The Unexpected Virtue of Ignorance), and in 2017 she won the Oscar for "Best Actress" and the Golden Globe for "Best Actress in a Comedy/Musical" for La La Land.note The former was the cause of the notorious botched Best Picture presentation later on, as a duplicate card for her win was given to Warren Beatty and Faye Dunaway rather than the one for Moonlight as Best Picture.

Her low-pitched, husky voice is the result of calluses she has on her vocal cords thanks to suffering from colic as an infant, which developed into nodules.

She is married to filmmaker Dave McCary, giving birth to their daughter in 2021. However, neither was officially announced by them.