Film / Ghosts of Girlfriends Past 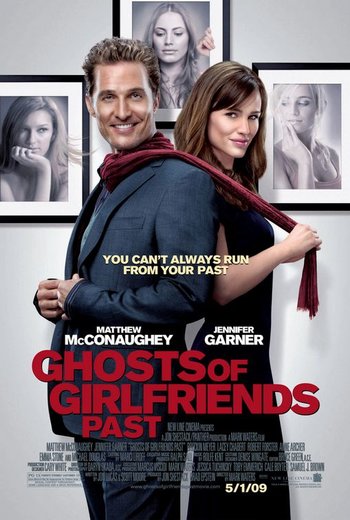 Ghosts of Girlfriends Past is a 2009 American romantic comedy film that stars Matthew McConaughey, Jennifer Garner, and Michael Douglas.

Connor Mead (McConaughey) is a famous photographer and serial womanizer. He attends his brother Paul's wedding, where he becomes reacquainted with Jenny Perotti (Garner), Connor's childhood friend and the only girl who's ever captured his heart. After Connor delivers a drunken speech at the rehearsal dinner where he says that love isn't real, he's met in the bathroom by the ghost of his uncle Wayne (Douglas), the man who taught Connor everything he knows about seducing women. Wayne informs Connor that, over the course of the evening, he will be visited by three ghosts who will lead him through his romantic past, present, and future.

As one can notice from this synopsis, the plot is based on Charles Dickens' A Christmas Carol, featuring a wedding day and the day before, rather than the familiar Christmas and Christmas Eve from A Christmas Carol. The three ghosts share similar appearances with the original descriptions, and the film shares the traditional plot points from the book.