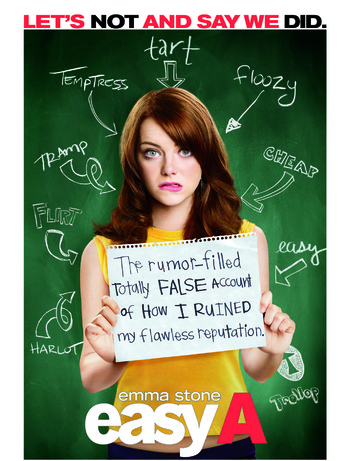 Todd: Screw all those people, Olive.
Olive: Haven't you heard? I already did.
Advertisement:

Easy A is a 2010 teen comedy directed by Will Gluck, written by Bert V. Royal (Dog Sees God), and starring Emma Stone.

Clean-cut high schooler Olive Penderghast (Stone) does not want to spend the weekend camping with her Best Friend Rhiannon (Aly Michalka) and her New-Age Retro Hippie family, so she explains that she has a date (with "George") and explains that he is a friend of her brother at college. Afterwards, when Rhiannon presses her for details, she is overheard insinuating that she lost her virginity over the weekend.

Rumors begin to spread and, after she spends an afternoon in detention with her gay friend Brandon (Dan Byrd), she agrees to pretend to have sex with him to help convince the school he is straight. Several boys learn what she has done and beg her to perform the same service for them, hoping to benefit from their "lost virginities". This eventually turns into a full-fledged business, lucrative for Olive and socially beneficial for the boys, but her new reputation as tramp/slut/skank/etc. gets her the attention of the local Christian club led by Marianne Bryant (Amanda Bynes). They want to "save" Olive, but also feel that it is vitally important to get her the hell out of the school first.

Olive's life begins to resemble that of Hester Prynne in Nathaniel Hawthorne's The Scarlet Letter. Olive then decides to use the rumors to her own advantage, affixing a red A to her clothing in reference to the embattled heroine of the novel. However, the glamour and mystery quickly deteriorates, and Olive must figure out how to reclaim her good reputation.