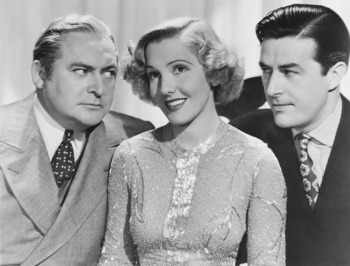 Something's strange about Mary...
Mary: (after a sable coat falls on her while she's riding on top of a double-decker bus) Say, what's the big idea, anyway?
Passenger behind her: Kismet!
Advertisement:

Easy Living is a 1937 Screwball Comedy film directed by Mitchell Leisen, and boasting a screenplay from Preston Sturges before his directing days.

With the fall of a sable coat during her morning bus ride, Mary Smith’s (Jean Arthur) world is turned upside down. She tries to return it to the rich-looking man (Edward Arnold), but he tells her to keep it. Unbeknownst to Mary, this man's the famous financier, J. B. Ball Sr., who could do without a few sable coats. He even buys her a matching hat to replace the one he ruined.

And why not? It’s the depression and who doesn’t want a fur coat and hat?

Yet, it causes some major events for Mary: she's fired from her job at The Boys' Constant Companion magazine because of the coat's dubious origins, and an eccentric man, Louis Louis, offers her accommodations in his empty hotel, The Hotel Louis, for no apparent reason. But even with the newly acquired luxury suite, there’s no food.

With her piggybank shattered for money, there isn’t much for the automat, and the cute boy, J. B. Ball Jr. (Ray Milland), who sneaked food for her, was fired.

But no bother, even with dubious gifts of expensive dresses and cars, she prefers this to working and being in her tiny apartment. With the cute automat boy, perhaps it isn’t so bad, perhaps she can get used to all this easy living.