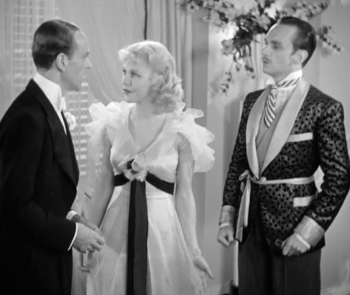 Mimi wonders which of these men she's supposed to spend the night with.
A 1934 Screwball Comedy Musical movie starring Fred Astaire, Ginger Rogers, Edward Everett Horton, and Alice Brady. Fred Astaire reprised his role from the stage play The Gay Divorce, as did Erik Rhodes, who played Tonetti, and Eric Blore, who played the waiter. Music for the play was by Cole Porter; for the movie, only the big hit of the show, "Night and Day," was retained, and several new songs by other composers were added.
Advertisement:

After spending some time in Paris, popular American dancer Guy Holden (Astaire) and his best friend, English lawyer Egbert Fitzgerald (Horton), land in London. While waiting at the London docks, Guy sees pretty American Mimi Glossop (Rogers) struggling with her dress, which is snagged in a trunk belonging to her aunt Hortense Ditherwell (Brady). Smitten, Guy offers his help, but in his haste to free Mimi, he pulls too hard and splits the back of the dress. Although furious at Guy, Mimi accepts his coat and calling card, then storms away without revealing her name or address.

Mimi returns the coat anonymously through a hotel bellboy, further frustrating Guy and inspiring him to sing "A Needle in a Haystack" about his determination to find her again. The desperate Guy drives the streets of London in search of Mimi and finally by chance crashes into the back of her car. Mimi takes off, but Guy pursues and eventually corners her in a park. After he proposes to her, Mimi tells Guy she cannot see him again, but she does at least give him her name.

Later, Hortense, who was once engaged to Egbert, brings the unhappily married Mimi to his office to discuss divorce proceedings. On learning that Mimi's neglectful husband Cyril, an English geologist, has refused to grant her a divorce, Egbert advises her to hire a professional co-respondentnote i.e. a man who will pose as her lover so that adultery can be used as grounds for divorce. Unaware that Mimi is the object of Guy's obsession, Egbert then convinces his lovesick friend to accompany him to a seaside resort, where the co-respondent is to rendezvous with Mimi.

At the hotel, Mimi finally starts to warm up to Guy after he dances with her to "Night and Day," but then due to a mix-up with the password, she mistakes him for the co-respondent. He is understandably confused when she first invites him to her hotel room and then treats him coldly once he gets there. Meanwhile, the real co-respondent—a cheerful, dandified Italian named Rodolfo Tonetti—searches the hotel for his liaison, giving increasingly mangled versions of the password to every woman he meets.

This confusion is eventually sorted out, and Egbert and Hortense then rush back to London to secure the needed detectives. Defying Tonetti's orders to stay in the room, Mimi and Guy sneak off, using the shadows of paper dolls to make him believe that they are still there, and pursue their romance on the hotel dance floor. The ensuing dance number, "The Continental," was at the time the longest musical sequence on film at seventeen and a half minutes.

The next morning, Hortense and Egbert, having been unable to find detectives, bring Cyril himself to the hotel. Although at first defiant and unyielding, Cyril gives in to Mimi's divorce demands when a hotel waiter unwittingly reveals to the group that he had met Cyril under a different name and with a different "wife" in tow. While Mimi and Guy celebrate her impending freedom, Hortense and Egbert announce that they were married on the way back from London.

The Gay Divorcee contains examples of: