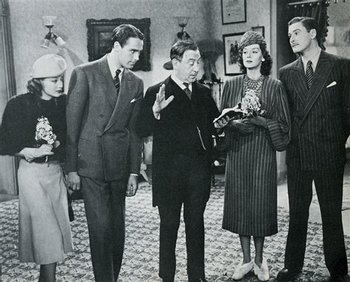 Who will marry who?
Advertisement:

The wacky, convoluted plot starts off with reporter Jean Christy (Russell, playing an Intrepid Reporter two years before His Girl Friday), who comes to work one day with a scoop only to find that her newspaper is about to go out of business. Jean goes marching into the office of the owner, Pat Buckley (Knowles), and demands that Pat rehire the former editor Bob Lansford (Flynn), who can turn the newspaper around.

It turns out that Bob has left journalism and is now running a lucrative PR business. He is desperately trying to land as a client the ultra-rich John Dillingwell. As it happens, John Dillingwell's granddaughter Lorri (de Havilland) is Pat Buckley's girlfriend. Romantic complications and comic silliness ensue as Jean tries to bring Bob back to the paper, Bob tries to reel in Lorri's grandfather, and everyone falls in love.

The only screwball comedy that Errol Flynn ever did; after this film did poorly at the box office he went back to action/adventure movies. Margaret Hamilton, the Wicked Witch, appears briefly as Lorri's governess.