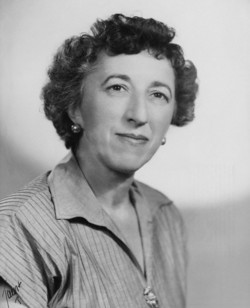 (During an interview, Margaret recalls a conversation with her agent when she was first offered the role of the Wicked Witch of the West.)
Agent: They're sort of interested in you for a part in The Wizard of Oz.
Margaret Hamilton: Oh gosh! think of that! I've loved that story from the time I was four years old, what (part) is it?
A: Well, the witch.
MH: The witch?!?
A: Yes, what else?
(Cue gales of laughter from the audience)
Advertisement:

Margaret Brainard Hamilton (December 9, 1902 – May 16, 1985) was an American film character actress best known for her portrayal of the Wicked Witch of the West, based on Dorothy Gale's malevolent neighbor, Miss Almira Gulch, whom Hamilton also played, in Metro-Goldwyn-Mayer's classic film The Wizard of Oz.

A former schoolteacher, she worked as a character actress in films for seven yearsnote often as a stiff, square Moral Guardian type; the character of Miss Gulch in Oz is very similar to the prissy spinsters she often played before she was offered the role

that defined her public image. The Wicked Witch of the West was eventually ranked No. 4 in the American Film Institute's list of the 50 Best Movie Villains of All Time, making her the highest ranking female villain. In later years, Hamilton made frequent cameo appearances on television sitcoms and commercials. Younger viewers may associate her as Cora the grocer from the Maxwell House ads. She also gained recognition for her work as an advocate of causes designed to benefit children and animals, and retained a lifelong commitment to public education. In her later life, Hamilton fully embraced her legacy as the Wicked Witch, making personal appearances, often (in keeping with her passions) in school auditoriums, signing all of her autographs "W.W.W." and deconstructing her role on Mister Rogers' Neighborhood as well as reprising it on Sesame Street, in an episode that was lost for nearly a half-century before it was rediscovered in 2022. Well into her old age, she was able to provide her legendary Evil Laugh on command, and reported that everyone always asked for it. In a charming surviving audio clip from a 1968 appearance they shared on The Merv Griffin Show, even her costar Judy Garland requests the laugh... and Hamilton brings down the house when she does it.

Hamilton had one son, whom she raised a single mother after she divorced her husband. Unlike many children of Golden Age Hollywood celebrities, he remembered her fondly and would claim that she often used the immortal catchphrase "I'll get you, my pretty... and your little dog, too!" in her private life. Neil Hamilton, who played Commissioner Gordon in Batman (1966), was a distant cousin.