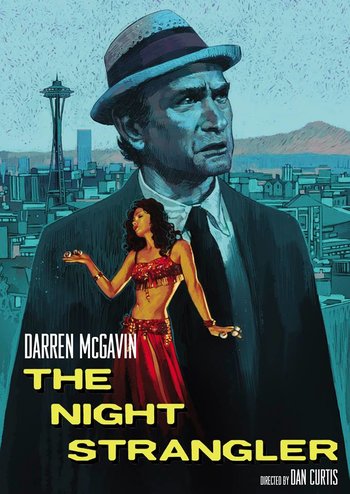 "They're not gonna kill this story. Not this time."
"This is the story behind the most incredible series of murders to ever occur in the city of Seattle, Washington. You never read about them in your local newspapers or heard about them on your local radio or television station. Why? Because the facts were watered down, torn apart, and reassembled... in a word, falsified."
—Carl Kolchak, opening narration
Advertisement:

The Night Strangler is a 1973 television horror film and a sequel to The Night Stalker, directed by Dan Curtis and written once again by Richard Matheson. Darren McGavin and Simon Oakland reprise their roles as Carl Kolchak and Tony Vincenzo, respectively, and are joined by Jo Ann Pflug, Richard Anderson, John Carradine, Wally Cox, Margaret Hamilton, and Scott Brady.

Some time after the events of the first film, Kolchak is hired by his former boss Tony Vincenzo to work at the Seattle newspaper The Daily Chronicle. Shortly after, a serial killer (Anderson) begins murdering belly dancers by strangling them to death. Sensing a story, Kolchak investigates and find that the killer is apparently immortal, killing women every 21 years. When the authorities refuse to listen, Kolchak enlists the help of belly dancer Louise Harper (Pflug) and shy researcher Titus Berry (Cox) to discover the truth and stop the killer.