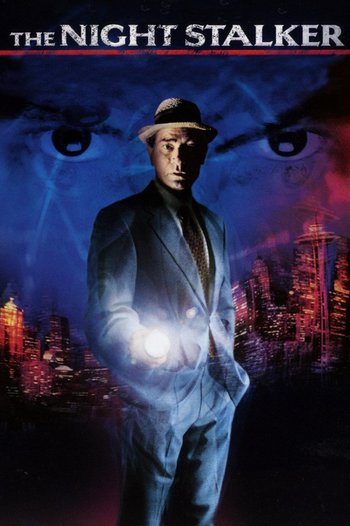 The Night Stalker is a 1972 made-for-TV horror film produced by Dan Curtis (of Dark Shadows fame), directed by John Llewelyn Mosley, and written by Richard Matheson, who adapted the unpublished novel The Kolchak Papers by Jeff Rice.

A mysterious Serial Killer (Barry Atwater) stalks Las Vegas at night, murdering prostitutes and draining them of their blood. When cynical and outspoken investigative reporter Carl Kolchak (Darren McGavin) is pulled from vacation by his boss Tony Vincenzo (Simon Oakland) to delve into the murders, he begins to suspect that the culprit is actually a vampire, or at least believes himself to be one. With the authorities refusing to listen to him—even as the killer manages to mysteriously avoid them and demonstrates Super Strength—Kolchak must convince them of the killer’s true nature, stop the menace, and get a good story out of it in the process.

Originally broadcast on ABC on January 11, 1972, the film received the highest ratings of a television film at the time, and was followed by a 1973 sequel, The Night Strangler, and a 1974–75 weekly series, Kolchak: The Night Stalker, which, while only lasting one season, became a beloved Cult Classic for its genuinely disturbing content and quirky dark humor.