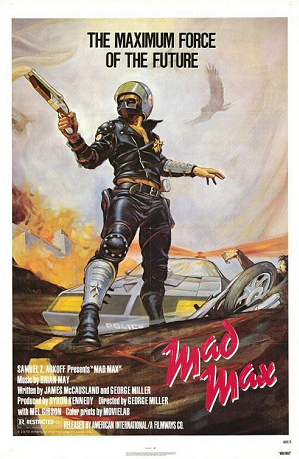 You better run, you better duck and cover
Advertisement:

Mad Max, the first film in the Mad Max series, released in 1979, is set "A Few Years From Now" at a time where scarcity of oil is beginning to cause the collapse of civilization — law and order is barely holding on within the towns while the highways are controlled by the outlaw gangs. Max Rockatansky is a Main Force Patrol cop, held in high regard by his boss and peers, with a happy home with his wife and young son — until run-ins with the motorcycle gang led by charismatic villain Toecutter cause his life to fall apart.

Made with practically no money, the film was surprisingly successful in Australia and around the world to the point where it was in The Guinness Book of World Records for decades as the most profitable film ever made.