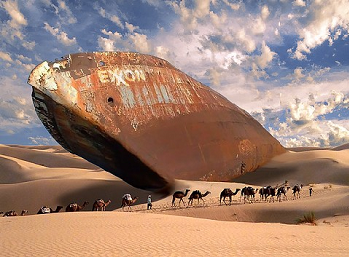 , used under CC BY 2.0 license.
Our last drop of oil will be burned by a tank.
— Loading Screen Text, Frontlines: Fuel of War
Advertisement:

Nothing in this world is forever, and that includes fossil fuels. Sooner or later, they will run out. The world relies heavily on petroleum products, not only for powering machinery, but for using that same machinery to transport products from A to B, to pave roads, to making plastics, to creating certain materials, to help making nitrogen-based fertilizers, the list goes on.

Bottom line: without petroleum, the world could very well go to hell. This trope explores that fact.

How it is explored depends on the work in question. In some works, it could just be a nasty bump on the road in the fiction's backstory that led to some troubled times, but was overcome by discovering a new fuel source, reverting back to a simpler time, or taking a third option. Typically, though, this trope doesn't have a positive side, and is usually a device to explain why the setting sucks so much, or in a After the End setting, what caused the apocalypse. What little fuel remains to be sold will have sky-high prices that only the wealthy can afford. Prices of everything else will be extremely high, thanks to increased transportation costs, usually leading to people starving in the streets. Law and order will break down as people become more and more desperate, resulting in mob rule in most cases.

In a worst-case scenario, nations go to war over the last remaining fuel reserves, resulting in a massive global war, the outcome usually being an After the End setting at worst, or at best, an even crappier world than before.

A sub-trope of Terminally Dependent Society.