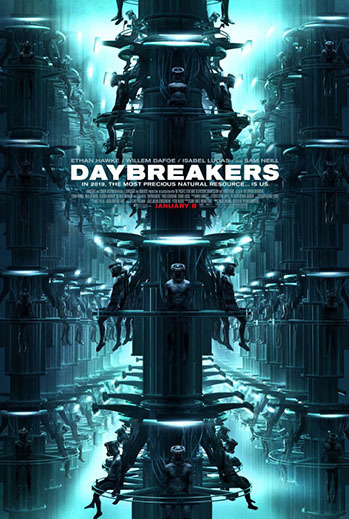 At least The Matrix lets you dream in your little tube.
Advertisement:

Daybreakers is a 2009 Sci-Fi Horror film written and directed by Australian filmmakers The Spierig Brothers.

By the year 2019, a vampire plague has overtaken the world. Vampires make up 95% of the population and all of its citizens and their legitimate governments. The humans are outlaws and hide mostly in the wilderness where they're hunted like animals.

The first quarter of the movie sets up the all-vampire society with minimal dialogue. To keep the sun from destroying them, wealthier vampires drive special cars with shields to block out sunlight while ordinary citizens make their way through the cities using a massive network of underground streets whenever they have to be awake during the day. Blood is harvested from humans in Matrix-like collection farms and sold to citizens at coffee bars.

As captured humans are tapped out and the number of free-ranging fugitives is dwindling, the blood supply is running dry. Edward Dalton (Ethan Hawke), who was made a vampire against his will, is a hematologist who's researching a means for synthesizing blood out of sympathy for the humans' plight. He soon finds himself falling in with a band of fugitives who claim to have found a cure for vampirism. His boss Charles Bromley (Sam Neill), a deliciously evil vampire, insists on developing a blood substitute instead of a cure so he can retain and expand his market share.