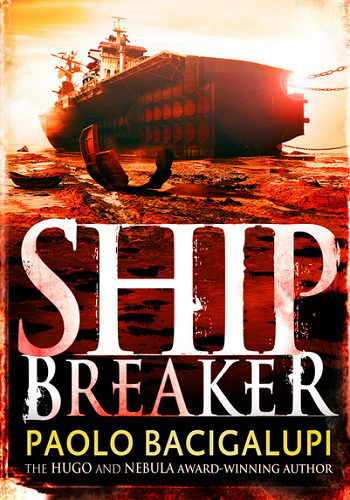 Ship Breaker is a Science Fiction novel by Paolo Bacigalupi. Set after the polar icecaps have melted, it tells a story of a world where oil is rarer than gold, scavenging is a way of life, and a few rich people (or "swanks") have all the power.
Advertisement:

Nailer, our protagonist, is a light crew member, who makes his living scavenging ships and oil rigs, supporting his drug-addicted father, and dreaming of his "Lucky Strike". When he and his friend Pima find a shipwrecked clipper that no one else knows about, they think they've struck it rich. The situation is complicated though, by the presence of Nita, a swank girl who was the only survivor of the wreck. Nailer hopes to ransom the girl, but before he can put his plan in motion, his father, Richard Lopez, arrives with a crew of thugs who plan to take the ship—and Nita—for themselves. Nailer and Nita are forced to make a run for it, with Richard, and diverse others, in hot pursuit.

See also The Drowned Cities, which takes place in the same world.