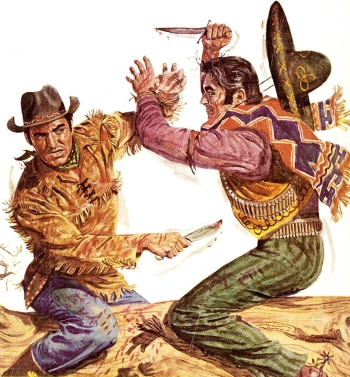 Everyone likes a Sword Fight, and for good reason. It's flashy! It's suspenseful! It's badass! It allows the hero to prove himself not just some guy designated to defeat the villain, but who can clash with him one-on-one and come out on top (or at least hold their own).

Problem is, not all stories take place in locales where a sword would be considered an appropriate weapon to have along, regardless of what the hero might prefer. This might be simply because the story takes place in The Future, where no one uses swords anymore (even Laser Blades). It might also be because the character is some manner of soldier, mercenary, scruffy rogue, or other manner of archetype who is thematically forbidden from using such extravagant weapons. Enter the knife—simple and useful enough that humans will certainly be carrying it around no matter where or when they are, yet dangerous and shiny and sharp enough that they can serve as a substitute for the Sword Fight in a pinch. Knives also have the advantage that you don't have to necessarily be a knife fighter to carry one around, meaning that any character is a candidate for pulling one out. All the drama with none of the camp!

Because knives are so small in comparison to swords (meaning that typical sword-fighting tropes can't really be used effectively with them), they tend to go a bit different from sword fights. While they can involve a lot of dodging and parrying in a sort of knife-based Flynning, most tend to be short and brutal. With knife fights, the emphasis is usually on the grit factor, with characters grunting and actively trying to go for the killing blow with every attack. Your typical Hollywood knife fight will always devolve into one character trying to stab another, with the other character grabbing the attacker's hands and trying to push them away. Unlike your typical sword fight, you can expect to see a lot of blood during a knife fight.

Common variations involve the fighters being tied to each other by the wrists (cuts down on bicycling) and both fighters being blindfolded (one participant will turn out to be a skilled blindfighter.)