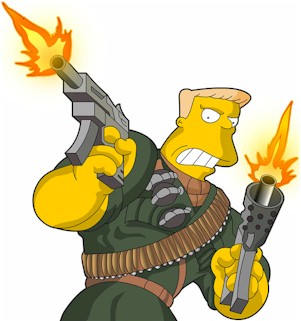 A subtrope of the Action Hero, a Hollywood Action Hero is The Hero of a Summer Blockbuster Action-Adventure Movie. He (and it's almost always a he) is usually defined by a few specific traits that separate him from other types of heroes:

Now compare the above to Common Mary Sue Traits.

Unsurprisingly, these types can fall into the Invincible Hero category if done poorly. Expect the hero to be bloody, bruised, and hurt badly by the end. He may be a Badass Normal, but he still worked for that victory. Speaking of normal, Hollywood Action Heroes rarely have superpowers, perhaps because they tend to fit a male viewer's "fantasy" of their ideal self, a strong warrior Übermensch type who kills bad guys, does good, and gets the girl.

The phrase "action heroes" appeared early in the 1960s, used to describe the Charlton Comics protagonists (later the inspiration for the characters in Watchmen). This phrase, coined by Dick Giordiano, applied to their mostly non-metahuman adventurers such as The Question and Ted Kord. The era with the biggest bunch of Action Heroes was the '80s and '90s, with big name stars like Sylvester Stallone, Arnold Schwarzenegger, Bruce Willis, and many, many others starring in a half dozen Summer Blockbusters every year. The Ahnold is a subtrope specifically referring to parodies of these guys. There was also a big action movie scene in Hong Kong, with stars such as Bruce Lee, Chow Yun-fat, Jackie Chan, and Jet Li kicking serious ass with kung fu (or Gun Fu, in the case of Chow Yun-Fat).

The movies of the 2000s have instead produced the Action Survivor who, rather than being a Marty Stu, is more akin to a Self-Insert Fic where Hilarity Ensues. Occasionally both are teamed up as an Action Duo. Contrast the Nerd Action Hero.