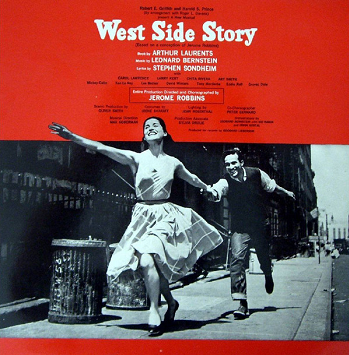 A Setting Update adaptation of William Shakespeare's Romeo and Juliet, set in New York City in The '50s.

Originally a 1957 Broadway musical presented by Robert E. Griffith and Harold S. Prince and directed by Jerome Robbins, with a book by Arthur Laurents, music by Leonard Bernstein and lyrics by Stephen Sondheim. It is notable for boasting some of the most famous songs in musical theater, such as "Tonight," "America" and "I Feel Pretty". Two film adaptations were made, one released in 1961 and the other in 2021.

It may seem Older Than Steam, with more than a few elements that you will probably recognize from other works. It is also a great example of "Seinfeld" Is Unfunny, with many modern audiences not understanding why it was such a groundbreaking musical in its time. It is recognized as the leader in using dance to further the plot, thanks to the choreography of Jerome Robbins, and is also recognized for portraying minority characters (relatively) positively, using vulgar language and slang, and not being a particularly feel-good musical.

Two gangs, one white American (Jets) and the other Puerto Rican (Sharks), are fighting over territory on Manhattan's West Side, and frequently have to contend with the police, lead by Lt. Schrank and Officer Krupke. During a dance at the local gym, which the gangs consider neutral territory, Tony, former co-founder of the Jets, falls in love with Maria, the younger sister of the Sharks' leader Bernardo. Even worse, they fall in love on the very night the two gangs decide to end their feud in one final battle. Tony manages to persuade the two gangs to reduce it to a "fair fight" of one-on-one fisticuffs, but when Maria tells Tony to stop the fight altogether, his attempt to intervene results in the leader of the Jets, his best friend Riff, getting knifed to death by Bernardo. In a fit of rage, Tony then kills Bernardo in return.

Act Two begins with Maria finding out about Bernardo's death from her implied fiancé, Chino, who then vows to kill Tony. Tony turns up and they spend the night together. Bernardo's girlfriend Anita shows up, and Tony escapes, with a plan to escape to the country. Anita, despite hating Tony for killing Bernardo, agrees to tell Tony to stay at the drugstore he works at until Maria arrives. When she gets there however, she is nearly raped by the Jets that have gathered there. In a fit of rage, she says that Maria is dead, killed by Chino. Tony's boss tells Tony this, and he runs out into the street, calling for Chino to "kill him, too." Maria and Tony meet each other in the street, but before they can properly embrace, Chino steps from the shadows and kills Tony. Grief-stricken Maria denounces both sides of the conflict for their part in Tony's death, and for how "we all killed him," "not with guns, not with knives, but with hate." Thoroughly heartbroken, the Jets and Sharks together carry out Tony's body. The End.

The year 2020 was set to be a landmark for the show, though it was marred by the onset of the COVID-19 Pandemic. In February 2020, a Broadway revival was staged (the first in more than a decade) by avant-garde director Ivo van Hove, who, for the first time, incorporated entirely original new and modern choreography into the show. It stars Isaac Powell as Tony, Shereen Pimentel as Maria, and Yesenia Ayala as Anita. However, performances of the show were postponed indefinitely less than a month into its run due to the pandemic and sadly cancelled altogether even when Broadway theatres reopened.