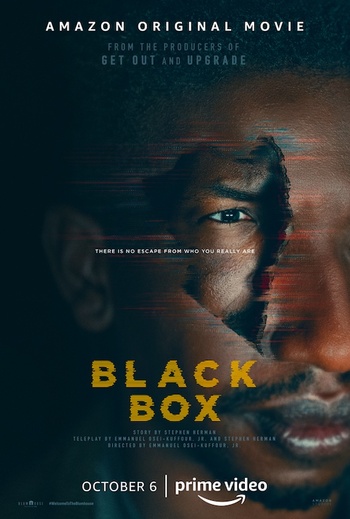 There is no escape from who you really are.
Black Box is a 2021 sci-fi drama-thriller, starring Mamoudou Athie and Phylicia Rashad. The film acts Emmanuel Osei-Kuffour Jr.'s directorial debut, and is part of the anthology film series Welcome To The Blumhouse.
Advertisement:

Nolan (Athie) is a successful photographer who recently lost both his wife and his memory to a car accident. His memory loss causes him to struggle with even the most basic of tasks, and as a result he has become dependent on his young daughter Ava and best friend Gary. Everything seems hopeless until Dr. Lillian Brooks (Rashad) offers an experimental treatment to hopefully revive his memories, using a device she calls the Black Box.

The film is a joint coproduction between Blumhouse Productions and Amazon Studios, and released through Amazon's streaming service, Prime Video.