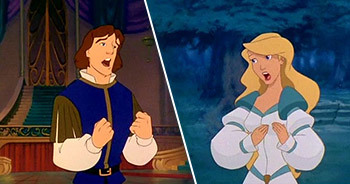 ♫"It's almost like you're here with me /
Although we're far apart!"♫
"I was able to manufacture a love song between two people who would have no possibility of eye contact with each other. That's one of the advantages of writing musicals rather than straight plays: you need no justification to be surreal, because the form itself is."
— Stephen Sondheim, Look, I Made a Hat
Advertisement:

Two singers sing the same song, but they are separated in space. Can be used to show the commonality of the two singers (such as two lovers sharing a love song while longing for each other) but another variation is the protagonists singing a happy song while the villain is plotting.

Common among Star-Crossed Lovers. The Song Before the Storm often uses this format. Related to Two Scenes, One Dialogue.

Naturally, a sub-trope of Let's Duet.

Ready As I'll Ever Be

All of Corona prepares for the epic final battle of Season 1.

Ready As I'll Ever Be

All of Corona prepares for the epic final battle of Season 1.