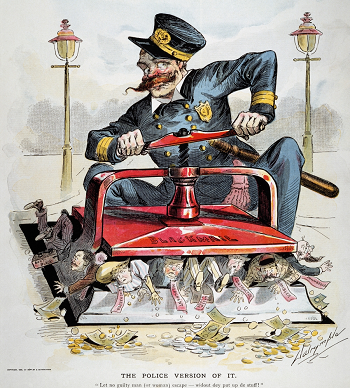 "Mackey's not a cop. He's Al Capone with a badge."
— David Aceveda, The Shield
Advertisement:

Why they're in front of bars and not behind them, no one knows. The dirty cop often appears as a villain in both Cop Shows and Criminal Procedurals. This cop tampers with evidence to get an arrest, lets thugs off the hook for a bribe or discloses internals to the local mob. This cop may hand out vicious beatings or even worse to suspects or just anyone this cop doesn’t like, if not even worse. This cop makes most criminals and prisoners look like... well, saints.

Exactly how dirty a dirty cop is can range from simply taking bribes to let criminals get away with their crimes, to actively supporting the criminals, to being straight-up worse than the "regular" criminals who don't wear badges.

While the FBI is often portrayed as honest and upright, especially when directly compared to the CIA in stories, it is not unheard of for FBI agents to be portrayed as "Filthy Feds" on an individual or organizational level, in keeping with J. Edgar Hoover's controversial legacy.

All too often an example of Truth in Television, for too many reasons to count. May escalate to Bad Cop/Incompetent Cop for entire precincts.

See "Blackmail" Is Such an Ugly Word, Cut Himself Shaving, Rabid Cop, Suspiciously Idle Officers, Bigot with a Badge, Prison Rape, Small-Town Tyrant, Lawman Gone Bad, etc. (especially Cowboy Cop and The Bad Guys Are Cops). If a cop outright murders people, you've got a Killer Cop. A dirty cop who gets sent to prison probably becomes a Pariah Prisoner, hated by regular inmates. Compare Naughty Narcs where it is the Drug Enforcement Administration (or the equivalent drug squad) that is portrayed as corrupt and dirty.

If it is just a façade and the cop secretly has a heart of gold, it's Noble Bigot with a Badge.

I am shocked, SHOCKED to find Tropes going on in this establishment!

Sheriff Toadsworth tries to stop a bandit duo. They merely pay him a little and he walks off pretending they don't exist.

Sheriff Toadsworth tries to stop a bandit duo. They merely pay him a little and he walks off pretending they don't exist.