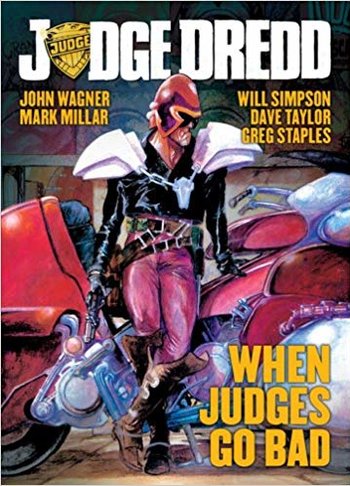 Not always this obvious.
"20 years I've been on the streets. You know what Mega City One is, Dredd? It's a fucking meat grinder. People go in one end, and meat comes out the other. All we do is turn the handle."
— Dredd
Advertisement:

At first glance, he is the Reasonable Authority Figure or maybe even a Gentleman Detective. However, if you push them too far in just the right place (may or may not be their Berserk Button), he will have a good reason to become an outcast from the police force and perform a Face–Heel Turn. What causes them to turn from the law they upheld varies, though disillusionment, disgruntlement or greed will usually be at the root of it.

Due to the nature of the trope, it's often used as part of the character's backstory, or as the surprise twist at the end.

If the lawman is not the hero of the story, then he might do a full Face–Heel Turn. After helping the hero defeat the villains, he turns on the hero and tries to kill him so he can have the money for himself.

To put it bluntly, this character is what's known as a Lawman Gone Bad. This is a character who takes pride in working for the law before an incident that makes him snap causes him to distance himself from those that he used to work for.

The character may also be a Big Bad Friend.

Related to Dirty Cop and Cowboy Cop. Compare Fallen Hero. The companion trope where someone who was once in the military and has turned to crime is From Camouflage to Criminal.