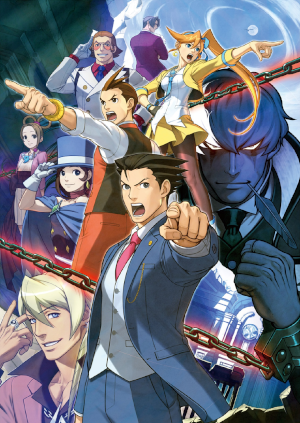 A phoenix will always rise...
"These are dark times, where the law has been reduced to rubble. And it's up to us to restore it to its former glory."
— Phoenix Wright, "Turnabout Countdown"
Advertisement:

One year after the events of Apollo Justice: Ace Attorney, the legal world is entering the seventh year of "the dark age of the law": a vicious cycle of false charges and forged evidence, where prosecutors and lawyers seek victory at any ethical cost and public trust in the courts is at an all-time low.

The story follows three lawyers of the Wright Anything Agency: veteran Phoenix Wright, who has regained his badge after a long absence from the courtroom; his Hot-Blooded apprentice Apollo Justice; and newcomer Athena Cykes, an eager young rookie who uses analytical psychology to aid her cross-examinations.

Together they seek to dispel the corruption within the legal system and restore it to its rightful glory, a task that pits them against the new prosecutor and detective on the block: Simon Blackquill, an infamous convicted murderer who uses psychological warfare to manipulate the courtroom, and the bumbling Bobby Fulbright, a man who firmly believes in justice.

The game features a wealth of returning cast members and newcomers, along with the return of the Psyche Lock and Perceive mechanics from previous games. A new feature is Athena's Mood Matrix, where she analyses the statements of a witness and looks for any inconsistencies between their words and emotions.

A sequel, Phoenix Wright: Ace Attorney – Spirit of Justice, was released in 2016, also on 3DS.

English and Japanese trailers can be viewed here

A character sheet for the whole series can be found here, and its own sub-section for Shout-Outs here.

open/close all folders
Tropes # to B
Tropes C to D
Tropes E to F
Tropes G to M
Athena: Apollo, tie me up in a new pose! ...Wait, you're not into this kind of thing, are you?
Tropes N to S
Tropes T to Z
Feedback