We Will Not Use Photoshop in the Future 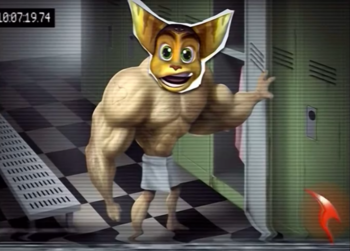 An in-depth Vox News investigation reveals that Ratchet skipped leg day.note By the way, this takes place in the future of 5357.
"What's the point? Pictures don't prove anything anymore. An image from an unknown source showing up at a very convenient time? No one would take it seriously."
— Tachikoma, Ghost in the Shell: Stand Alone Complex
Advertisement:

In fiction, photographic and video evidence of any kind is automatically accepted as genuine and unimpeachable. If someone has either one, and it shows you doing something bad, then you're screwed. The possibility that it could be digitally faked is never even considered unless the provenance of the evidence is central to the plot — and when it is proven, it is a great shock and surprise to all who were fooled by it.

In reality, it's very difficult to fake these things digitally or otherwise. Not a year goes by without some fake UFO video

appearing and subsequently being torn to pieces by over analyzers

. Any competent effects artist or Photoshop user will tell the difference quite easily. This could potentially change in the future, however, as the technology becomes more sophisticated.

Not surprisingly, this is starting to move into Discredited Trope territory as people in general become casually familiar with digital manipulation.

Since the trope is so prevalent, only exceptions or particularly egregious examples are worth mentioning.