The Dog Was the Mastermind 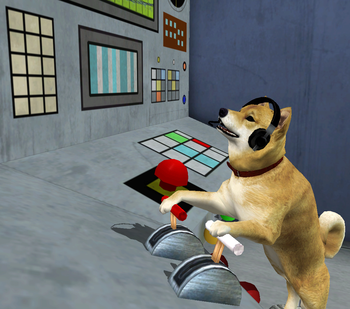 Huh. Well, that explains everything.
"Scooby-Doo—it's always that character who had one scene you forgot about."
— Doctor Hack, The Nostalgia Critic
Advertisement:

The Hidden Villain turns out to be about the least conspicuous person possible. The Big Bad, The Man Behind the Man, The Mole, etc was underneath your nose the whole time. The dog was the mastermind! Guess sometimes it is the person you least expect.

You've seen them before. Maybe once, maybe a few times, maybe repeatedly throughout the story, but you never suspected a thing up until The Reveal. Sucker. The Butler Did It is the classic, Cliché example (which never really was a cliché.)

Beware, however, in certain types of fiction, such as when you are supposed to guess the identity of the villain, this can come off as an enormously crappy twist ending. Or at least a really confusing one. Though Genre Savvy fans will likely see this ending coming a mile away if a Living Prop is played by someone sufficiently recognizable.

A subtrope of Obvious Villain, Secret Villain and Chekhov's Gunman, when a seemingly episodic character eventually turns out to be of crucial importance for the plot (but not necessarily as the villain). Compare Milkman Conspiracy, which is when an entire organization that shouldn't have this much influence does.

Keep in mind that this is a Reveal Trope, so beware of unmarked spoilers!

One of the camp kids, Deacon, reveals himself to be none other than the notorious gangster Babyface Boretti in disguise. Even Velma admits she didn't see it coming.

Alternative Title(s): The Dog Is The Mastermind

One of the camp kids, Deacon, reveals himself to be none other than the notorious gangster Babyface Boretti in disguise. Even Velma admits she didn't see it coming.