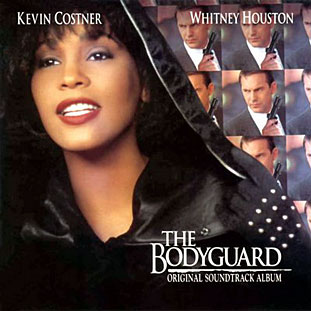 Bodyguard Crush Incarnate!
"Never let her out of your sight.
Never let your guard down.
Never fall in love."
Advertisement:

A 1992 film starring Kevin Costner and Whitney Houston. Costner plays former Secret Service agent and freelance bodyguard Frank Farmer, hired to protect superstar singer-turned-actress Rachel Marron (Houston) after she starts getting death threats. They initially dislike each other, but despite his better judgement, feelings start to develop between them.

Originally written by Lawrence Kasdan for Steve McQueen and Diana Ross in The '70s, the project was taken up by Costner fifteen years later, with Costner and Kasdan as producers and Mick Jackson as director. This film was a huge success, as was the soundtrack, which sold in the bazillions (it's widely considered to be the top selling movie soundtrack of all time), all fueled by the unbelievable popularity of Houston's rendition of "I Will Always Love You," originally by Dolly Parton from The Best Little Whorehouse in Texas. In addition, the movie's instrumental music was marvelously done by Alan Silvestri (and finally released on its own album a mere 21 years later). In 2013, the film headed to stage in the form of a Jukebox Musical featuring many of Houston's hits.