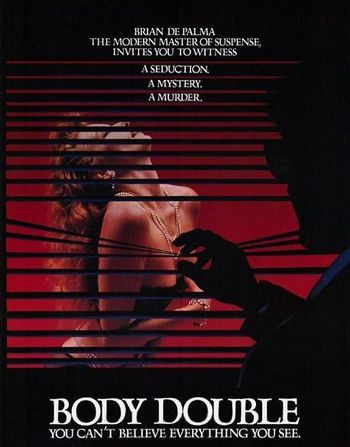 An actor named Jake Scully (Wasson) is struggling with claustrophobia (which cost him his most recent job in a horror flick)—and has found out his girlfriend is cheating on him. Left without a place to stay, Scully accepts a job as a house-sitter for a futuristic house with a 360 view of the Hollywood Hills. The best part is a neighbor has a tendency to striptease in her bedroom, visible for an eager voyeur. All well and good...until Scully notices that he isn't the only one watching.

Famous for 1) its constant Homage to Alfred Hitchcock (particularly Rear Window and Vertigo); 2) its show-stopping sequence featuring "Relax" by Frankie Goes to Hollywood (which was a major hit but banned in the UK, and this film was the only way some audiences got to hear it); and 3) its intense invocation of Fanservice.