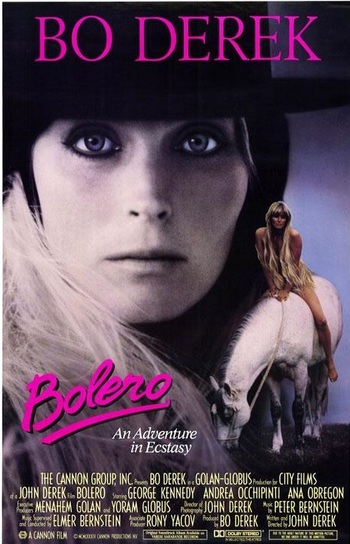 Bolero is a 1984 American romantic drama film starring Bo Derek, and written and directed by her husband John Derek.

In The Roaring '20s, Ayre "Mac" MacGillvary (Bo Derek) is a young college graduate who, being the orphan heiress to a vast fortune, is determined to find the right man for her wherever he might be in the world. Rich enough not to venture forth alone, she brings along her best friend Catalina (Ana Obregón).

Mac first travels to Morocco where she meets who seems at first to be an ideal lover, an Arab sheik, but when the sheik turns out to be a lousy lover, Mac goes on to Spain, where she meets the toreador Angel, and sets out to seduce him. Unfortunately, after she has succeeded in her quest after several days of courtship and flirting to lose her virginity, Angel is gored while bullfighting the next day.

The injury leaves Angel despondent and moping away, so Mac makes it her mission in life to see to his recovery. Along the way, she takes up bullfighting herself.