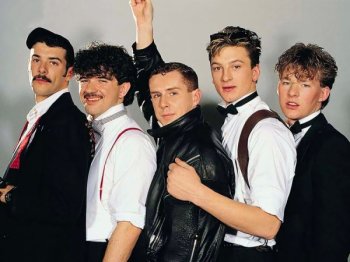 "The power of love,
A force from above,
Cleaning my soul.
Flame on burn desire,
Love with tongues of fire,
Purge the soul, make love your goal."
— "The Power of Love"
Advertisement:

Frankie Goes to Hollywood was a British dance and pop band from Liverpool. Formed in 1980, the band eventually found success under the wing of producer Trevor Horn and became the flagship band of his Zang Tuum Tumb (or ZTT) record label. Their debut album, Welcome to the Pleasuredome, is considered a masterwork of Horn's production and featured the extremely popular singles "Relax", "Two Tribes" and "The Power of Love". "Relax" came under fire for featuring homoerotic lyricism and was banned by the BBC. Having two openly gay bandmembers – the vocalists – maybe didn't help.

1986 saw the release of Liverpool, their second album and the first to actually feature the band performing on it (Horn having overproduced Pleasuredome to the point where every note was played by Horn or session musicians.) While charting high and having a successful lead single in "Rage Hard", Liverpool had much less of an impact. The band folded in 1987 after a world tour, when lead singer Holly Johnson was sued by ZTT for trying to sign to another record label for a solo career. The courts eventually sided with Johnson, noting the band's contract being highly restrictive. Johnson has since released material sporadically while he enjoys a career as a painter, while Rutherford released one solo album before retiring; the rest of the band have tried at various times to get back together, hiring vocalist Ryan Molloy from 2004-2007 to tour again.

Frankie Goes to Hollywood was also known for their very esoteric packaging: a form of Design Student's Orgasm courtesy of Paul Morley, in which every inch of space was covered either with text or with visuals (a technique used throughout the ZTT stable, including The Art of Noise, Propaganda, Act, etc.) The single for "Two Tribes" famously included a chart detailing all of the biological effects of nuclear fallout on civilians, as well as a breakdown of the nuclear armament of the United States and Russia. Frankie also had a habit of releasing an excessive amount of remixes across every format available at the time, with unique mixes appearing in various territories.