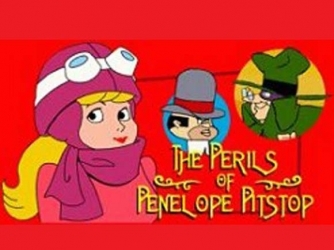 "I'll get you, Penelope Pitstop!"
Advertisement:

Headlined by one of the most fetching females in animation, The Perils of Penelope Pitstop was one of two animated series spun off from Wacky Races (the other being Dastardly and Muttley in Their Flying Machines). Implied to be set between 1911 and 1930, the series was strongly influenced by The Perils of Pauline, a silent movie serial.

The heiress Penelope, a classic Damsel in Distress, was the ward of Sylvester Sneekly. Unknown to her, Once per Episode Sneekly assumed the identity of the Hooded Claw. With the aid of his identical twin henchmen, the Bully Brothers, the Hooded Claw caught Penelope in one Death Trap after another, in hope of taking over her inheritance. Invariably, the Hooded Claw would explain his trap in detail to Penelope.

Although she often escaped the Hooded Claw's traps on her own, Penelope had friends in the Ant Hill Mob, a group of seven little men whose car, Chugga-Boom, may have been a prototype for Speed Buggy. The Interactive Narrator was also on her side, providing advice and encouragement. Frequently, after the Mob rescued Penelope, she had to rescue them from an unintended consequence of their heroics.

The show's voice talent comprised Janet Waldo as Penelope; Paul Lynde (uncredited) as the Hooded Claw; Gary Owens as the Narrator; Don Messick as Dum-Dum, Snoozy, Pockets, and Zippy; Paul Winchell as Clyde and Softy, and Mel Blanc as Yak Yak, Chugga-Boom, and the Bully Brothers.