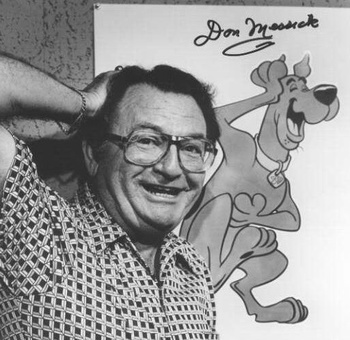 Some of his most famous roles were the Title Character of Scooby-Doo (arguably the role for which he is best remembered), Bamm-Bamm Rubble from The Flintstones, and Astro from The Jetsons. His characters often had a raspy dialect, which Messick attributed to decades of smoking. He eventually gave up tobacco use in 1995, but the loss of his rasp led to him leaving the role of Scooby.

Sadly, despite quitting, the damage from decades of tobacco use took a toll on his health. In 1996, Messick suffered a stroke while recording voices. He recovered, but decided to retire from voice-over to spend more time with his family. He died of a second one in 1997. A year later, Scooby-Doo on Zombie Island was released in his memory.