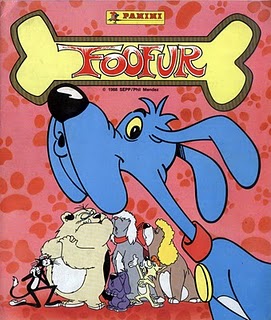 Foofur was an animated series created by Hanna-Barbera that debuted on NBC in 1986.

The series followed the titular character, a skinny blue dog who lived in the house of his late owner, along with his canine friends: his niece Rocki; Louis, a bulldog; Annabell, a sheepdog and Louis's mate; Fritz-Carlos, a tiny mustachioed dog with a French accent; Hazel, a cocker spaniel and Fritz-Carlos's mate; Dolly, a basset hound; Burt, a wolfhound, and Fencer, the only cat of the group. They all worked together to keep their beloved home from being sold by the real estate agent Mrs. Escrow, and her pet Chihuahua, Pepe, who constantly tries to expose Foofur's pals, without any success.