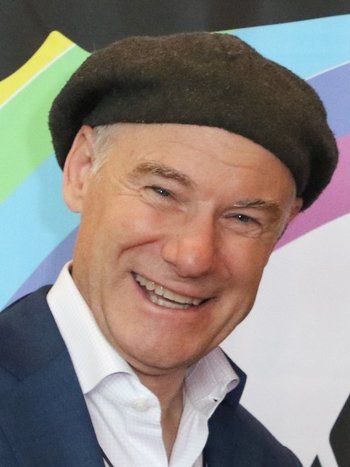 James Ross Meskimen (born September 10, 1959) is an American comedian, impressionist, and actor, known for his work on the improvisation show Whose Line Is It Anyway? and as the voice of President George W. Bush and other politicians for the internet Jib Jab animated shorts. He voices Thom Cat, Neighbor John, and Stumpy in Random! Cartoons.

Meskimen was born in Los Angeles, California, the son of actors Marion Ross and Freeman Meskimen. Meskimen portrayed the father of Mary-Kate and Ashley Olsen's characters in the 2000 direct-to-video film Our Lips Are Sealed. He is a Scientologist. He has also portrayed the role of Officer Wholihan in the 2000 Holiday fantasy-comedy film How the Grinch Stole Christmas! He was also a contestant on Season 8 of America's Got Talent. Since the death of Robin Williams (and even in a few years before that), he's been the voice of the Genie in some of Disney's crossover works. (Meskimen is incredibly skilled at replicating Williams's voice.)

His mother is none other than Marion Ross.