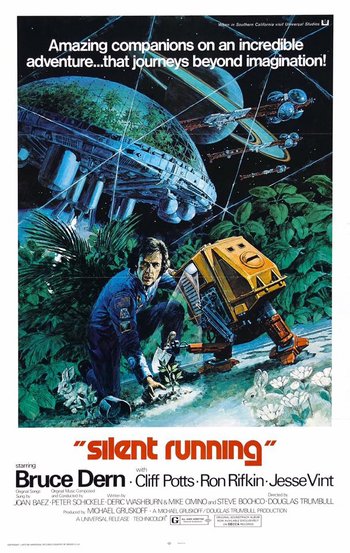 "Running silent in my sleep..."
Advertisement:

In the future, the environment of Earth has been destroyed, with the only plant and animal life left being preserved in domed forests aboard American Airlines space freighters in orbit around Saturn. Freeman Lowell, a botanist onboard the freighter Valley Forge and apparently humanity's last environmentalist, tends to the forests religiously and hopes that they can one day be returned to Earth and used to restore it to its natural state. When the decision to reassign the freighters and destroy the domes is made, Freeman becomes obsessed with protecting them. He kills his crewmates and escapes with the last dome, assisted by three robot drones he names Huey, Dewey, and Louie. He must then escape discovery and survive a collision with Saturn's rings.

A well-known favourite of The BBC film critic Mark Kermode, who thinks it's a better movie

Not to be confused with the Mike and the Mechanics song of the same name, nor the trope Silent Running Mode.