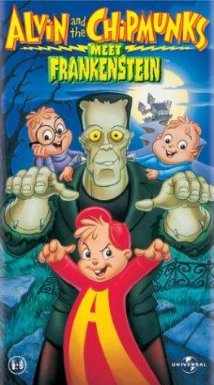 The first one is Alvin and the Chipmunks Meet Frankenstein, a horror-themed animated film that came out in 1999 produced by Universal Animation Studios, animated by Tama Productions, and distributed by Universal Studios Home Entertainment.

While the Chipmunks are working in a famous movie studio park called Majestic Studios in a singing attraction, the real Dr. Frankenstein comes to work in the studio's most famous attraction, Frankenstein's Castle. After Alvin drives a crazy bus chase, they miss their next performance and get locked in the studio after closing time. Dr. Frankenstein figures the castle is not scary enough so he re-builds the real Frankenstein. IT COMES ALIVE! So it finds the boys and starts a wild and scary adventure!

NOTE: Tropes under here are specifically for the 1999 Direct to Video movie.