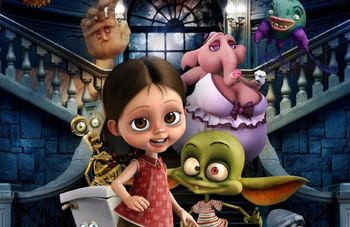 Most of us have had an imaginary friend...

Ana and Bruno (Ana y Bruno in Spanish) is a Mexican Horror Comedy animated film directed by Carlos Carrera and released on June 12, 2017. This film is unique amongst most others in that despite technically being child-friendly, it's willing to tackle subjects most films of its type would be wary of going near, like mental illness and ableism.

A young girl named Ana and her mother Carmen are committed to a psychiatric ward because they are both relentlessly tormented by a horrifying, flaming Eldritch Abomination that only they can see, which keeps trying to attack both of them. However, while exploring the ward, she ends up meeting Bruno, a kind-mannered goblin who turns out to be the hallucination of a paranoid schizophrenic, and soon finds the friendlier but no less strange and diverse hallucinations of the other patients, all given physical form. Soon, they all have to leave the ward and band together to find Ana's father so that he can prevent his wife from undergoing electroshock therapy under the hands of the ward's barbaric staff, all while slowly uncovering the dark truth about Ana's predicament.

Ana and Bruno provides examples of: