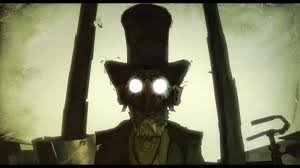 "The Undertaker's comin'..."
For as long as anyone can remember, the coming of the undertaker has meant the coming of death.
Advertisement:

The Backwater Gospel is a short film, published on YouTube, about a small town called Backwater that is in a bit of a predicament. Namely, whenever the local Undertaker bicycles into town, someone dies the same day.

One day, however, the Undertaker comes to town... and no-one dies. Not one person. The Undertaker simply sits on a bench and watches the townsfolk. The fear and uncertainty as to who will finally die sweeps across the town, and it's only a matter of time before someone snaps...

It can be watched online