When It Rains, It Pours 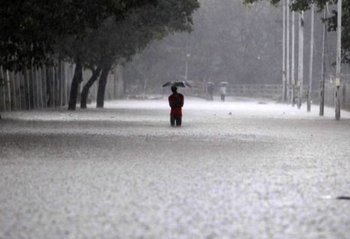 When it rains in media, it never seems to restrict itself to a light sprinkling or a drizzle. On the contrary, if it rains at all, it rains in buckets. This trope is when A Storm Is Coming, and when it gets here, it immediately opens up with a torrential downpour (sometimes prefaced with Dramatic Thunder). It never starts with a light rainfall that grows into a larger storm. When it rains, it pours.

The reason for this, of course, is that heavy rain is easier to pick up on camera than the usual light sprinkling seen in nature, thus directors and producers will choose to intentionally drench their performers for dramatic effect. Most such scenes are created using a sprinkler frame suspended over the scene, operated by a worker with a hose. In such cases the wide shots tend to have weather that looks very clement; in close-up, cue the downpour, with lots of shots of the performer's soaking wet hair and clothing.

If a light rain has to be used, it's usually represented as slow moving sparse white lines.

Truth in Television for some regions; the western U.S. is especially known for violent cloudbursts. In deserts, if it rains at all, you had best run for high ground, because the soils tend to have a hydrophobic crust which promotes flash flooding. This style of rain is also fairly common in the United Kingdom, and is one of the reasons why scenes set in the country often show it raining heavily. In real life, this sort of rain in the UK is most common during spring and at the height of summer, usually following a period of sustained humid and hot weather. It can also happen quite frequently during late autumn and through the winter.

See also Cyber Punk With A Chance Of Rain, Cue the Rain and Thunder = Downpour.

Do badly on the third part of "Neraiuchi", and Cleopatra will drown her stranded slaves!

Do badly on the third part of "Neraiuchi", and Cleopatra will drown her stranded slaves!