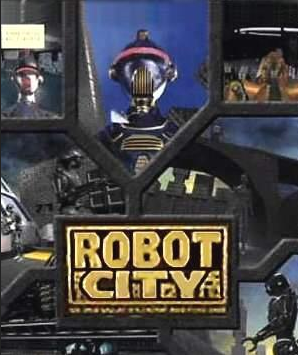 Robot City is a first-person pre-rendered mystery video game, developed by Byron Preiss Entertainment in 1995. Based closely on the Isaac Asimov novel series of the same name, primarily the second book.
Advertisement:

You are Derec, a man with no identity, memories, or even name. You have crash-landed on a distant planet, which contains the eponymous Robot City, the perfect society for robots and humans alike. However, two other people got here while you were unconscious: Dr. David Poole and his assistant, Katherine Burgess, along with their robot companion, Alpha. Dr. Poole has been murdered, and the robots, knowing you are the only other human here besides Katherine, have pinned you as the prime suspect. Now you must explore the city to prove your innocence.