Video Game / Shadow of the Colossus 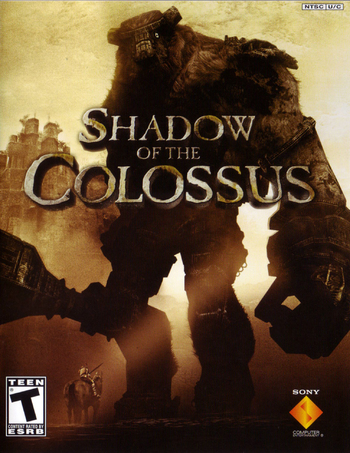 Stand on the shoulders of giants.
Some mountains are scaled. Others are slain.
— Promotional Tagline
Advertisement:

Shadow of the Colossus is a 2005 Action-Adventure game and the second entry in the Team ICO Series. Directed by Fumito Ueda, the game does away with numerous conventional videogame formulas to create an aesthetically breathtaking experience centred on massive fights and world exploration. The storyline is vast but told with very little exposition, which allows players to form their own story based on their individual experiences.

A young man named Wander enters a forbidden land on horseback, carrying with him the corpse of a girl named Mono and a stolen sword. He travels to the Shrine of Worship in search of Dormin, a mysterious god-like being believed to have the power to control the dead. Wander's arrival at the Shrine awakens Dormin; the deity's disembodied voice confirms Dormin can revive Mono... but warns Wander that he will pay a terrible price in return. Dormin instructs Wander to seek out and kill sixteen Colossi spread throughout the forbidden land; only after all sixteen of the giants have fallen will Dormin resurrect Mono.

As Wander navigates the vast and mostly empty land on his horse Agro, he has only one tool to help him: the stolen sword, which is magical and creates a beam pointing in the direction of his next battle when held up to the light. This beam becomes less and less helpful as the game progresses, as finding the later Colossi involves lots of long detours through shadowy mountain paths and dark valleys. Aside from his sword, his bow, and his own strength and cunning, Wander has nothing else to fall back on; there is no armor to collect, no items to use, and no secret power-ups hidden away somewhere. (Well, not until New Game+, anyway.)

When Wander engages in battle with a Colossus, he must defeat it by climbing the creature's body to locate and attack specific weak points. All of the Colossi will do everything to make reaching those weak points difficult, so battles can take much longer than the typical boss fights in other video games. Once Wander kills a Colossus, he is transported back to the Shrine of Worship, and the process repeats itself...with some subtle changes in Wander's looks after each cycle.

Of course, Wander can also just spend hours and hours exploring everything.

This game is unique in several ways:

Shadow of the Colossus was originally released on the PlayStation 2. In October of 2011, Sony bundled it with its predecessor ICO for an Updated Re-release on the PlayStation 3. Sony announced a remake of Shadow of the Colossus for the PlayStation 4 during E3 2017, to be developed by Bluepoint Games with assistance from SIE Japan Studio. The remake's assets were made from scratch, along with an optional new control scheme, but it is otherwise faithful to the original. It was released on February 6, 2018.

Josh Trank after the success of his film Chronicle — at least until his next film Fantastic Four (2015) came along, as its massive failure (largely laid at Trank's feet) essentially ended any involvement from him.

Shadow of the Colossus contains the following tropes:

In his quest to bring back the soul of his beloved Mono, Wander makes a deal with the entity Dormin, who warns the youth of dire consequences...

Example of:
Deal with the Devil

In his quest to bring back the soul of his beloved Mono, Wander makes a deal with the entity Dormin, who warns the youth of dire consequences...