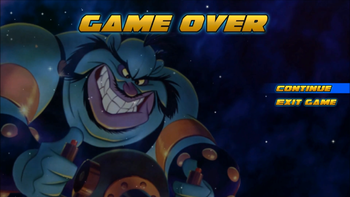 "Oh, it's you again. You died so carelessly..."
— Charon, Shin Megami Tensei IV. Be prepared to hear that a lot.

The Game Over Man is the character many video games show to the player after getting killed. Often he's the Grim Reaper, or a laughing Big Bad, but he's occasionally an ally mourning the hero's fall. Sometimes, he offers a "Have a Nice Death" or "It's a Wonderful Failure" message.

The trope name is a play on a line from Aliens.

Not a Mega Man boss who attacks by giving you an instant Game Over, real or otherwise. (That would suck.)

King Boo laughs right at the camera during a Game Over.

King Boo laughs right at the camera during a Game Over.