This page contains unmarked spoilers for Five Nights at Freddy's. You Have Been Warned! 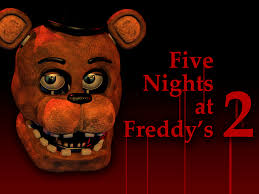 Twice the Freddy, still not ready!
"Hello? H-hellooooo? Well, if you're hearing this, then chances are you've made a very poor career choice."
Advertisement:

Congratulations, and welcome to your new job as night watchman at the new and improved Freddy Fazbear's Pizza! Your job couldn't be simpler: you just spend your nights watching the security cameras for any sign of trouble...not that you would expect any from such a quiet and innocent place.

Now, I know what you're thinking: "Wasn't there some urban legend about Freddy's being shut down due to the animatronic critters coming to life during the night and violently murdering any human they came across by stuffing them into a costume filled with pointy metal gizmos?" Yeah, that got a laugh at the last stockholder meeting. In fact, the company is so confident in their new branch, they've given you a modern open-plan office with no doors to shut in case of an emergency. There's also a music box you'll need to wind remotely in order to pacify one of the… odder animatronics.

On the off chance that something against all laws of man and nature should occur (Heaven forbid!), we've given you a cost-effective solution to protect yourself: a hollow Freddy Fazbear helmet to fool any clockwork cattle that happen to meander into your office. You've also thought ahead and brought your own flashlight; good thinking! You can use that to illuminate the various locations just outside your office and scare anything away. That flashlight seems to have a limited battery life, though, so… uh… think green!

You really don't have anything to worry about. It's just a simple night job, after all...

A series of teaser images released on Scott's website showcased both improved graphics and new character models; these were followed by a rather horrifying trailer.

Scott released the next game in the series, Five Nights at Freddy's 3, on March 2nd, 2015.