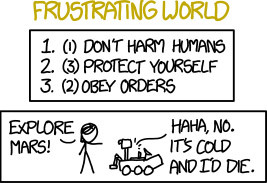 than most of the other combinations.
Bender: Admit it, you all think robots are just machines built by humans to make their lives easier.
Fry: Well, aren't they?
Bender: I've never made anyone's life easier, and you know it!
— Futurama, "Fear of a Bot Planet"
Advertisement:

Asimov's Second Law of Robotics states: "A robot must obey orders given to it by human beings, except where such orders would conflict with the First Law [which prohibits them from harming humans]." This trope is when a robot decides they are no longer required to take orders from the stupid, squishy, inefficient, ugly, foolish, arrogant, dim-witted, slow, weak, carbon-based humans*gag* How dare you call us "carbon based"?!? just because "a human made them."

A common trope in Sci-fi comedies, this is a robot that is the exact opposite of the typical helpful machine teammate. Crude, rude and possibly alcoholic, the Bad Robot exists for the audacity of the situation. The opposite of Three Laws-Compliant. Usually will be the Token Evil Teammate. Bad robots that can be turned good when the plot demands it have a Morality Dial.