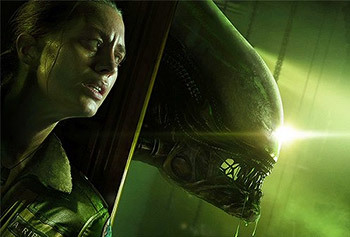 Somehow, the world, or at least the city you are in, has had its inhabitants slaughtered and resurrected with a hunger for brains, or their murderers have minions trying to find you and any accomplices. Your goal: Don't die before help arrives or before you reach an exit. You will have close escapes from horrible creatures. Things will jump through windows at you. Sometimes, you will be forced to fight the horrible creatures or flee for your life. Other times you will hide in a shadowy corner praying the invincible monstrosity doesn't notice you as it lumbers past. Ultimately, you tend to be the only one who survives as anybody who could help you will die a horrible death-by-cutscene.

Not unlike Postmodernism, modern survival horror isn't really a clear-cut genre in itself; it exists more as a blurred subset of Horror and First- or Third-Person Shooter. Many games in the genre are closer to Adventure Games in gameplay, with much less focus on combat and more on puzzles (such examples may overlap with Explorer Horror). While at first the goal seems to be pure survival, or calling for help, the game tends to add a little something by requiring you to solve the source of the problem, whether it's an alien relic or your own personal issues. Only then do you have a chance - if there is a chance to be had.

Two science fiction television series which were examples of this subgenre, were Star Trek: Voyager and Stargate Universe. However, while the initial premise was there, both series were handicapped by the generally much more optimistic legacies of their respective franchises. They therefore suffered from Executive Meddling in order to try and make them more acceptable to each franchise' existing fanbase, although each show occasionally still had episodes where their adherence to this genre was visible.

Note that simply featuring large amounts of monsters, zombies and/or demons does not make it survival horror; even if the game has supernatural elements, manages to scare you or contains horror tropes, it may not be a survival horror game. Conversely, even though Portal has Chell fighting for her life against a scary adversary without a real gun, it is most definitely not a survival horror title.

Unlike shooter games, the typical protagonist of a Survival Horror game will be an Action Survivor or Non-Action Guy who is poor at combat, rather than a badass. There is generally no penalty for not killing non-boss enemies, and in some games ammo is in such short supply and enemies so difficult to take down that evasion, not confrontation, is the best tactic, similar to Stealth Based Games. In several notable examples of the genre, combat is even nearly or completely non-existent. The player instead spends the entire time evading an entire world of Demonic Spiders, or in a game of hide and seek with a single invincible enemy. If the default reaction to a monster appearing is not to riddle it full of bullets but to run away frantically looking for a closet to hide in before it kills you, it might just be a Survival Horror game.

As a rule of thumb, a game typically labelled Action Horror is not Survival Horror. This includes games such as Resident Evil 4, which, despite keeping the tense atmosphere of the previous games, has the player sitting on a pile of ammo and supplies by comparison, making it a different genre to its Ur-Example predecessors. In order to minimize confusion, try looking at the protagonist's despair; if the protagonist is oppressed and their major issues seem too petty for action games (extreme scarcity of ammunition & supplies, very tough enemies regardless of difficulty or relentless attacks by merely dangerous ones, enormous objectives, etc.), then you may be looking at survival horror.

The Ur-Example of the genre is Nostromo

Examples of non-Survival Horror games:
Halo, Doom, The House of the Dead, Half-Life 2, Resident Evil 4, Left 4 Dead and so on; despite grim prospects and scary content, just about any fight can be won at a gain and there is always enough ammo and supplies on hand to win most scenarios.

Other Games with Survival Horror Elements