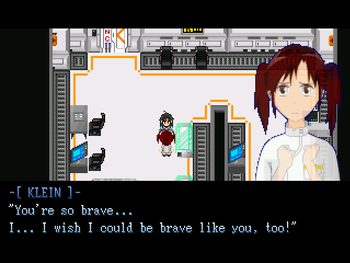 A 2013 RPG Maker 2000 game developed by the indie circle TWM STUDIO, translated into English by Memories of Fear in 2016. In 2132, a meteorite containing unicellular organisms with DNA that resembles life on Earth is discovered, suggesting proof of the Panspermia theory on the origin of life on our planet. This leads to the discovery of a new planet in our solar system, given the name Harmonia. With Earth's resources stretched thin, a survey team is sent to Harmonia to determine if it has the resources to support human life, as well as confirm or deny the truth of the Panspermia theory.

The Panspermia is a survival horror game with heavy inspiration from Dead Space, Alien, and the Lovecraft Mythos. The player explores several locations on the surface of Harmonia to uncover the truth behind the many mysteries of the planet, collecting items and documents to further the investigation. The player is armed for much of the game, but enemies are powerful enough that running and hiding are far more effective than trying to fight past threats. A notable feature of the game is its focus on the characters, with certain scenes playing out differently depending on the player's relationship with the other crew members.

This game contains instances of: