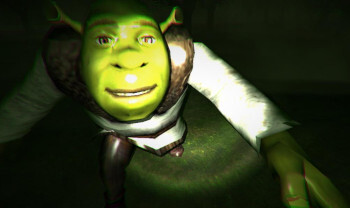 "This is a Shrek game, and if you know the internet, Shrek is a well-respected individual who has many homages to him and his gloriousness made on the internet."
— Markiplier

Swamp Sim is a fan-made Shrek horror game made in the style of Slender. You play as an unnamed character who is going through the titular ogre's swamp, collecting onions while trying to avoid capture by Shrek himself.

The game is essentially a Slender game with a Shrek skin, one that takes the "Shrek is Love, Shrek is Life" meme and plays it up for sheer terror... and manages to be just as scary as the original Slender, possibly more so in some areas, with a touch of hilarity.

Despite the title, this is not a SimCity or The Sims game with a swamp theme. A Lets Play video by Markiplier can be seen here

Hi everybody, and welcome the Shrek and the Trope Karaoke Dance Party!