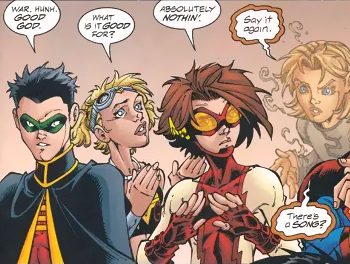 They couldn't resist the temptation to sing.
President Haney: Please God, don't let him quote lyrics.
Vice-President Matthews: [eulogizing] Muskrat Susie, Muskrat Sam. Do the jitterbug out in Muskrat Land. And they shimmy, [voice cracks] and Sammy's so skinny...
— My Fellow Americans
Advertisement:

Bob and Alice are talking, and you the viewer can't help but notice that there is something weird with Bob's dialogue. When he finishes speaking it turns out that Bob was using the lyrics to a well known song to make his point. Alternatively, Bob could have been singing, but the fact that the song was mainstream was hidden due to the fact that the song was reworked or sounded more appropriate to the character's situation than it actually was. Either way, the writers have made a joke by subtly slipping a popular song into the events of a show and then revealing it. Writers, like all people, just love to play with words.

This is a favorite trick of time-travelers or ambassadors to alien civilizations, who will break out song lyrics whenever they need to say something vaguely intellectual-sounding. This often seems to manifest as a game of dueling aphorisms with a local philosopher, who will always end up being impressed with such an obviously learned man. See I'm Mr. [Future Pop Culture Reference]. This is also a common trait of the Pop-Cultured Badass and the Cloud Cuckoo Lander.

Obviously, if the viewer knows the song well, they'll see the joke coming, but the joke is intended for a larger audience who are aware of the song but wouldn't know the lyrics by heart. If it appears in a children's show, it likely doubles as a Parental Bonus. Prone to happening when dealing with songs that get stuck in your head.

When used in Fan Fiction, this is Song Fic. Not to be confused with That Reminds Me of a Song, "One Song To The Tune Of Another" or "singing

the wrong lyrics". Also has no relationship to a certain Magical Girl.

Nigel accidentally attends a Carnival audition. He then proceeds to do a dramatic performance of ''I Will Survive'', turning that into a Villain Song (not that it isn't adequate).

Nigel accidentally attends a Carnival audition. He then proceeds to do a dramatic performance of ''I Will Survive'', turning that into a Villain Song (not that it isn't adequate).