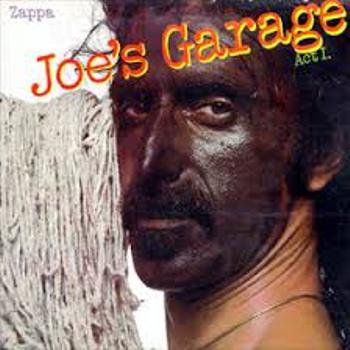 Not approved by the Central Scrutinizer.
"This is the Central Scrutinizer. It is my responsibility to enforce all the laws that haven't been passed yet. It is also my responsibility to alert each and every one of you to the potential consequences of various ordinary every day activities you might be performing, which could eventually lead to... the death penalty."
Advertisement:

Joe's Garage is a 1979 Rock Opera by Frank Zappa that follows the trials and tribulations of Joe, a guitarist in a world where music has been made illegal. It is told through the eyes of the Central Scrutinizer, who reminds us throughout how music can mess you up. Originally, it was released as two albums: Joe's Garage (Act I) (a single album) and Joe's Garage (Acts II & III) (a double album). On CD, the first disc consists of Part I and the first half of Part II, while the second disc contains the rest of the album.

The story starts with the Central Scrutinizer introducing the premise of the tale: this is a government-sponsored album about how music can mess you up. It tells the tale of Joe, who started a rock band as the government was planning to outlaw music, and shows what happened after he got arrested for disturbing the peace. Soon enough, his girlfriend Mary leaves him and turns into a "crew slut" for a band named Toad-O; his priest becomes an MC at a Florida bar; and he contracts an STD from a girl he met named Lucille. With nowhere to go, he eventually turns to the Church of Appliantology and pays them 50 dollars to learn that he is apparently a latent appliance fetishist. This in mind, he learns German and dresses up as a housewife before going into a bar called "The Closet" that apparently caters to appliances. After picking one up, he takes it home and ends up breaking it from plooking it too hard. For this, he is arrested and taken to a special jail for people in the music business, as the government has just enacted a law banning music – a parallel to the real-life banning of music that occured in Iran during the Iranian Revolution, just months before.

While in prison, he is raped many times by record producers and executives, and when he eventually gets out, has gone somewhat insane; a condition not helped by the fact that music is illegal and therefore he has nothing to do. Instead, he becomes sullen and withdrawn, and decides to "dwindle off into the twilight realm of my own secret thoughts", wherein he dreams of imaginary guitar notes that he knows would irritate all the music executives that tortured him. He continues to wander around town, dreaming of guitar notes, then vocals, then albums and critical reviews, until eventually he realizes that all of the notes only exist in his mind. As such, he goes into his room, plays one last imaginary guitar solo (the penultimate "Watermelon in Easter Hay"), and then hocks his imaginary guitar in order to get a job at the Utility Muffin Research Kitchen (the name of Zappa's recording studio, but in-universe is an actual muffin factory.) The album closes with the Central Scrutinizer pointing out once again that yes, music can really mess you up, and singing the last song on the album in order to prove it.

"Joe's Garage" is a bit of a Broken Base among fans, with some claiming it's his last "great work" before a long period of lesser albums in the 1980s began, with some even claiming it to be his best album. Others point to Sheik Yerbouti as his final great record and say that "Joe's Garage" actually started a decline in quality, with more obnoxious voices, bawdy comedy, sparse musical instrumentation and topical Protest Song material that nowadays is heavily dated. Nevertheless, "Joe's Garage" has some popular fan favorites, including the Title Track, "Catholic Girls", "Crew Slut" and "Watermelon In Easter Hay".

Sex and Side Gigs

The White Zone is for troping and un-troping only. If you have to trope, go to the White Zone. You'll love it. It's a way of life.

Information is not knowledge, knowledge is not wisdom, wisdom is not truth, truth is not beauty, beauty is not love, love is not music, music is the best!