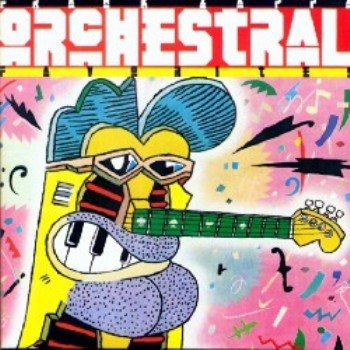 Orchestral Favorites is a 1979 album by Frank Zappa, notable for being his first full length Classical Music album. It has been praised for its rich colorful sound and marked the debuts of "Bogus Pomp" and "Pedro's Dowry".

However, at the time, just like Studio Tan (1978) and Sleep Dirt (1978), the album was released by his label Warner Brothers without Zappa's permission. The company had indulged in Executive Meddling on Zappa in New York (1977) and re-released the album in a censored version, which prompted Zappa to sue both Warners and his former manager Herb Cohen for contract violation. As a result Warners froze all of Zappa's production temporarily, while he was forced to continue touring as it was the only way to make new money. To add insult to injury Warners released all these three albums as separate records, while Zappa intended them to appear on a quadruple album (eventually released as 3 CDs) Läther. Not only was this done without his permission, but there were no liner notes or art work prepared, causing the musicians to remain uncredited. Comic strip artist Gary Panter was brought in to design the album cover and sleeve art, without being informed of all this backstabbing.

Meanwhile Zappa provided a Take That! against Warners by bringing all the tracks from these albums to a local radio station and broadcasting them live on air for his fans to tape and bootleg. Luckily he would eventually win his lawsuit and become owner of his entire catalogue. The CD versions of Studio Tan, Sleep Dirt and Orchestral Favorites give the musicians proper credit, but after Zappa's death most of the material was also made available on the album he originally intended it for: Läther (1996).